For centuries, the French had one of the largest and most effective militaries on the Continent.

“the French haven’t the nature for war. They would rather eat and make love with their faces than fight. *officers in the room all chuckle smugly*”

In 1753, when the movie takes place, this sentiment would have been absurd.

If anything, the British army was pathetically small and weak compared to the great armies of the Continent.

Over a century later Bismarck would say:

“If the British Army landed in Europe, I’d get the Belgian police to arrest them.”

Bismarck on the other hand certainly saw France as a real threat. As a German statesman, his ultimate nightmare was being crushed between a Franco-Russian alliance.
And, of course, he knew all too well the Prussian army had been crushed by Napoleon.

The French were a world class terror. So what the hell happened to the Anglo-American image of the French?

Our story begins when France lost Alsace and Lorraine to the Prussians thanks to the machinations of none other than Bismarck.

Though many people in that region were culturally German and spoke German anyway, this loss became an intolerable affront to France’s long military tradition and fanatically nationalist spirit.
From that point on, the French were determined to regain their losses and take their revenge, whatever the cost.

This atmosphere resulted in the rise of a breed of generals and officers who were haunted by the French defeat by the Prussians and were determined to learn the lessons of history.
At the decisive battle of Sedan, the French had lost the initiative and had been on the defensive until forced to agree to humiliating peace terms.

The solution: Never lose the initiative in the first place. Always attack.

It was with this attitude that the French military establishment approached WWI.

Far from being effete or absorbed in luxurious pleasures, the French were hyper-aggressive, often suffering twice the casualties as the Germans.
Hundreds of thousands and ultimately millions were killed often for no strategic gain whatsoever.

The generals on both sides ended up consciously designing strategies so that the other side would run out of men first rather than trying to achieve decisive strategic objectives.
It was Mutually Assured Destruction without nukes.

And guess what? The French won. Their political and military leaders got Alsace and Lorraine back. French National spirit had been avenged! Hooray!

Naturally, the belligerence that had characterized French sentiment seemed less of a good idea than it used to.

When the Great War promptly started up again after everyone took a 20 year break to grow more soldiers, the French were for some reason less than enthusiastic.
For nearly a year after war was declared there was “phoney war” where life pretty much went on as it had before. For some odd reason, no one, least of all the French, really felt like fighting.

When French defenses collapsed underneath the first German assault France promptly made its separate peace with Germany.

From this moment they’ve been characterized as effete “surrender monkeys” in the anglosphere.

The French however, truly had learned from history this time.

They could maybe still have spent years throwing away millions of lives defending abstractions such as national pride or lines on a map.

Instead they made their peace and consequently suffered very little compared to most nations in WWII.
Their cities and land stayed largely intact and they even got their own region of home rule under the Nazis.

The Vichy government was of course a puppet state, but the Nazis generally had other stuff to deal with. They preferred to let the French take care of their own internal affairs rather than having to waste their own energy on administration. For the most part the partnership worked great.

Our Surrender Monkey in chief who signed the surrender terms and headed the Vichy state was Marshal Petain.
A total wimp and a pushover, he routinely had seen more men die in a single day than the Americans lost in all of WWII.

Petain had been one of the few WWI French generals who seemed to actually give a shit about his men. He made sure his troops got rotated in and out of the trenches rather than being stuck there for months until being driven insane or having their feet rotted off.
Unmanly as he was, he was hesitant to throw away lives on suicide charges.

Given a treaty that could save millions of French lives, he signed it and then worked to sustain the peace as head of government.

His reward?
Petain was sentenced to death as a traitor after the war when he was almost 90 years old. Only on account of his age and service in WWI was he given a life sentence instead. He still managed to serve a surprising amount of his sentence dying at age 95.

After WWII, a humiliated French military establishment wasn’t satisfied with peace. They were anxious to re-establish French grandeur through more fighting.

Europe was broke many times over after the two world wars.

To even begin to put it in perspective:
The British had spent a quarter of their national wealth by the end of the war.
If the US did the same thing, that would be the equivalent of 50 trillion dollars or 10 Iraqs a year for 5 years straight.

Yet the French military tradition was old and it wasn’t going to die easy. They ended up spending huge amounts of American money trying to re-assert authority in their colonies.

The French military elites started where they had left off after WWI making notoriously disastrous moves such as parachuting an entire army into a hopelessly indefensible and unsuppliable position at Dien Bien Phu that was surrounded by Vietnamese artillery.

The average French person hadn’t too much reason to care any more about distant colonies that had never benefited them or about the military brass who were pretty thoroughly discredited by this point.

After even DeGaulle, himself a general, realized trying to hold on to the colonies was not going to work and that it didn’t have sufficient public support, he finally started to pull the plug.
Ancient militaristic strains in French culture decided they were going to go down kicking and screaming, especially after French colonists were expelled from Algeria.
DeGaulle had to survive multiple assassination attempts after finally calling it quits.

Thus, the development of the concept of the militarily inept, surrender loving French that we see in modern American culture and entertainment was a work in development not quite complete until at least the 1960s.

Remember those Norman French guys who took over in 1066? They didn’t stop being French for a long time.
Anglo-Saxon was for peasants.
Ever notice how Robin Hood’s enemies have names like ‘Guy de Gisborne?’
LINK

We tend to think of the Hundred years war as a classic conflict between the British and the French.

Really, it was a war between French nobles over France. Many of England’s Norman descended rulers were more invested in Aquitaine and Normandy than in England, which was a relatively minor corner of their empire.

Here is a map of “England” towards the end of the 12th century AD. 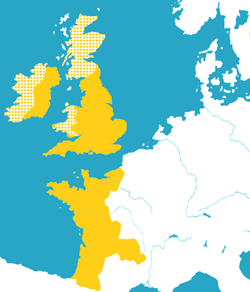 A main lesson here is how we project our present values on the past.

-We forget that nationalism is a largely 19th century idea that would have been incomprehensible to 12th century nobles.

-We somehow tend to assume that the Normans gave up France just because they took over England. Again modern ideas of nationalism distort our perspective.