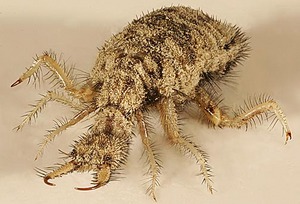 How to Find and Take Care of This Loyal Pet

The original site I wrote this for shut down last year.  Truly nothing on the internet is permanent.  I managed to dredge it up from the archives.  But there was hardly any wordpress 10 years ago.  10 years from now, who knows?

The antlion is no adult insect but a larval version of a neuropteran. The adult resembles a dragon fly, but it is a slow, feeble flier with short club shaped antennae.

The larva, as the name would suggest preys upon ants. It lives concealed in shady, sandy areas where there are plenty of ants wandering about. Its presence is detectable by the smooth half inch to three and a half inch wide funnels it digs as traps. Their homes somewhat resemble very miniature versions of the sarlacc pit in Return of the Jedi.
When an ant or other small insect falls into the funnel, it senses the vibrations and comes to the surface. As the prey scrambles desperately to escape, the antlion flings dirt with powerful flicks of its head and jaws. When this sprayed sand hits the mark, the quarry tumbles back down to the bottom of the pit, where the antlion has another chance to grasp it.

Antlions have long powerful jaws that snap shut like a steel trap. Once prey is caught, it is held fast and pulled inexorably underneath the sand. An antlion’s body moves only in reverse, it is made specifically for powerfully dragging a struggling victim. Usually, the prey’s head remains exposed above the sand and one can see the flailing antennae begin to slow and finally become still. During this time, the antlion has been injecting the prey’s exoskeleton with digestive fluids that quickly dissolve the innards into a digestible soup. Once a meal is consumed it lies in wait once more.

During this whole process, the antlion stays hidden. If one wishes to capture an antlion and see it up close, simply grasping a handful of sand where a funnel is located rarely works.
The best method is to throw an ant into a sandpit and wait until the antlion has grabbed onto its prey before acting. One can swiftly take a handful of sand and sift through it for the antlion. Or if it’s a larger antlion that can take on bigger prey, quickly grap the struggling ant and pull out the grasping antlion along with it.

Once captured, an antlion fascinates with its otherworldly appearance. It is rarely longer than a quarter of an inch, but some can reach one half before they pupate. One can hold it in the hand without fear; antlions are incapable of biting people and it is a unique sensation as it jerkily scoots backwards in circles across one’s skin.

Once one has captured an antlion, one has the option of keeping it as a pet. It is an ideal animal to keep because it is very low maintenance and it does not escape. Any container with loose sand is suitable. I’ve even made do before with a styrofoam cup. Once released, an antlion will dig backwards into the sand within seconds. In a matter of hours, its funnel will be complete. One is then free to drop in prey. It is most convenient to put one’s pet antlion in a container that does not allow prey to escape. This way, one can keep it alive in a few minutes each day by picking up some ants and throwing them in the container.

Most antlions can eat 2-3 ants a day. Antlions make funnels in proportion to their size so that they will trap the prey that best suits them. Small antlions are best suited to tiny ants. Larger ones give the biggest thrills because they can be fed bigger ants that fight and struggle far more vigorously.
Like spiders, antlions always know when prey is too big for them by the size of the vibrations. They won’t bother to attack if fed the wrong prey.

-and tiny gamma males that are much smaller than females or males.

What do these male types correspond to in terms of behavioral strategies? LINK